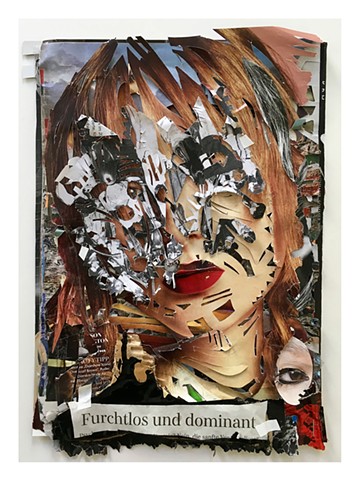 "Furchtlos und Dominant" represents a significant piece and instantly became my personal Mantra in a politically abusive atmosphere that I genuinely believed surrounded me.

The black and white half veil is a protective mask and was initially inspired by Gucci.

The image of the "Single Eye," in the foreground symbolizes as in many of my creative works: protection, foresight, watchfulness. It could be equally perceived as the eye of the artist looking back at the viewer. This artwork was acquired in 2021 into the permanent collection of the Berlinische Galerie in Berlin.